This article was first published in the Washington Island Observer.

A glimmer of hope for the future of chestnut trees throughout the Midwest is growing on Washington Island. The first chestnut tree blossom at Gathering Ground’s public farm was spotted on OK Kwang, a Japanese chestnut tree seedling acquired from an orchard at the University of Missouri. This is a promising sign, as a blight in the early 1900’s took out most chestnut groves across America. Russell Rolffs, Gathering Ground president, was the first to spot this small flower on July 10.

“This tree is so young and already putting on a flower,” Russell Rolffs said. “I have grafted apple trees that have been in the ground five to six years that are still not flowering or producing fruit, and this is a nut tree that is putting on flowers in year two. That is wild. It shows me that regardless of climate and the huge macro elements of growing chestnuts here, it says that they like this little spot, this soil, which is hopeful.”

Gathering Ground is a nonprofit organization that focuses on community- based farming, education, and conservation.

The chestnut orchard at Gathering Ground is a recent addition to their various projects that aim to build a stronger connection between the community and the environment through agriculture sustainability. Alessandra Rolffs, Gathering Ground executive director, believes there are numerous benefits to growing a chestnut orchard on Washington Island.

“Trees, which are perennial crops, are a great way for sustainable agriculture,” Alessandra said. “Trees produce crops every year, but you don’t need to plant them every year. There is less tillage and environmental degradation and trees provide habitat.”

Gathering Ground has two main goals for this young chestnut orchard. The first is to produce food for the island in the future. Known as the bread tree due to similarities in nutrition and milling abilities, chestnuts can be used as substitutes for flour.

Russell Rolffs describes chestnuts as, “A quiet player on the background of a plate.”

Gluten free with a slightly sweet flavor, chestnut flour can be baked into bread and sweets, pureed in soups, added to numerous dishes, mixed into ice cream, or roasted and eaten plain. Chestnuts also are a food in many cuisines, such as Japanese, Chinese, and Italian.

Before the 20th century when a pathogen, originating from Asia, greatly reduced the number of these tall and fast-growing American chestnut trees, Castanea dentata was commonly used for furniture, fencing, and building materials due to its resistance to rot and its straight-grained wood, according to information from the American Chestnut Foundation Gathering Ground’s second goal for the chestnut orchard is to combine a variety of chestnut genes that will successfully grow an abundance of produce able to ripen in the short, cool growing season of Washington Island. Russell Rolffs is conducting research-based experimentation involving controlled crossings of genetic material to accomplish this goal.

“This is citizen science. I am not a professional in this but I am trying to learn from professionals,” Russell Rolffs said. “I want to start breeding maybe as soon as next year and then share that material with other northern growers. That is part of the mission of the orchard.”

Gathering Ground is experimenting with a mix of Japanese, Chinese, and American chestnut trees to find genes most suitable for the Island climate. The OK Kwang is just one tree variety showing potential at the orchard.

“That one has been in the ground for two years and it is flowering,” Russell Rolffs said. “That is a good sign that it likes it here. It is a very young tree to be flowering, so that is really cool.”

Washington Island’s shorter growing season has not been a limiting factor to the health of the trees, as very few have died due to the longer winter months, he said. 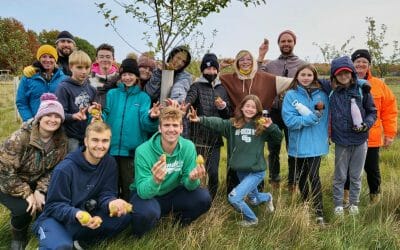 Wild And Precious: Year In Review

As I've been looking over photos and evaluations from this past summer's programs, I hear Mary Oliver whispering her...

END_OF_DOCUMENT_TOKEN_TO_BE_REPLACED 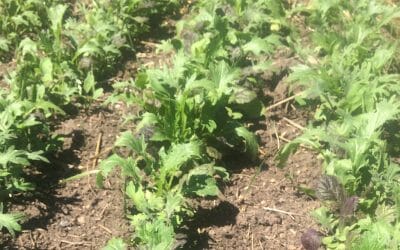 Gathering Ground is excited to begin hosting a community garden on the Grounds in 2023. Our goal with the community...